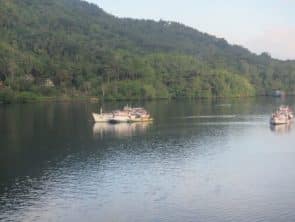 LINI has been working in the Banda Islands since January 2015. Banda Islands situated in the Banda Sea, and part of the Western Central Pacific Ocean. Administratively, Banda belongs to Maluku Province. The Archipelago was famous once as the only world’s source of the nutmeg until the mid-19th century. The project aims to support the development of a Banda Handline Yellowfin Tuna Fishery Improvement Program, which is being implemented by the industry (PT. Intimas Surya), and assisted by the Sustainable Fisheries Partnership.

Yellowfin tuna is an important artisanal fishery, supporting the livelihoods of coastal communities in the Banda Islands. Traditional tuna fisheries from the Banda Sea are caught by fisher folk who live on the remote volcanic islands of the Banda Archipelago in eastern Indonesia. These fishers live in Banda Neira, Kampung Baru, Banda Besar Island, Lalaut, Ai Island, Run Island and Hatta Island. The fishing grounds cover the outer islands of Run and Hatta, and even reach out to Ceram Islands in 50 to 60 nm