Our first juvenile Banggai Cardinalfish at the LATC 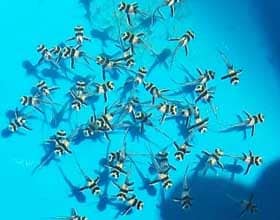 We are very excited to share the news that we have our first juvenile Banggai Cardinalfish at the LINI Aquaculture and Training Centre (LATC). They were released from the males’ mouths as post-larvae juvenile fish approximately 5-6mm long on Saturday 19 September 2015.

The juvenile fish were released in our large raceway aquarium at the LINI Aquaculture and Training Centre (LATC). As the raceway is so large and can only be viewed from above, we did not notice that the males were carrying eggs in their mouths. We estimate that the eggs would have been laid on 21 August 2015.

Banggai Cardinalfish (Pterapogon kauderni) are paternal mouthbrooders. Before being released as juvenile fish, a clutch of eggs is incubated in the mouth of the male fish before the eggs hatch. The embryos then remain inside the mouth cavity for a further period of time where they consume their egg yolk and develop to post-larval stage. Throughout the incubation period, which is approximately 28 days, the male fish does not eat.

Prior to this, when we observed pairs of fish separating from the group we removed them to their own aquariums, allowing them to establish their territory for courtship and spawning. During the afternoon of August 29, we spotted the first Banggai Cardinalfish male carrying eggs in its mouth and since then the spawning has continued by different pairs. There are now 11 males with swollen mouths and they are about to release their babies in the coming days.

After two months at the Centre, the Banggai look healthy. We feed them with green mussels, frozen mysis shrimp and local cocktail abalone.

We are pleased with how our breeding program for this endangered species is going and hope to bring you more news soon!

If you are interested in learning more about our ornamental fish breeding program or visiting the Centre please contact us by email at: info@lini.or.id or telephone: +62 361 8427 168.