Internships and volunteers at LINI Aquaculture and Training Centre 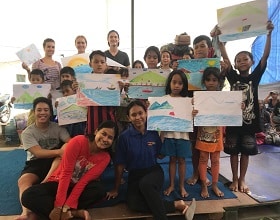 We have been very busy in the last six months, hosting many interns and volunteers. Three fresh graduate University students, Nyka from Jogjakarta, Hani from Purwokerto, (both in Central Java). and Vany from Padang (West Sumatra) spent three months, from June to August, conducting internships at our Centre. Currently, we have Anthony from Jakarta, Stephanie from Bandung and Dewi from Bali.

The Indonesian interns helped with our marine and environment education program for local schools, also with breeding ornamental shrimps and clownfish.  The purpose of the internships was for the interns to gain work experience, and also to learn about various aspects of our community development program, which is one of the main focus programs of our Centre.

In July the Centre hosted three Australian volunteers from the Universities of Murdoch and Western Australia. And this month, until 23 December, we are hosting two volunteers, both from Murdoch University. In addition, there were four students from the University of Cendana, Kupang, Timor. The interns and volunteers are working with the nine women workers who come from Les village, and who work at the Centre. This has been a wonderful opportunity for all of them to interact and learn about each other’s lives, as they all came from very different backgrounds.

One activity which was initiated by Nyka and Karis, an intern from Murdoch University, was the painting of a mural with an underwater theme on the walls of the Centre. The activity created an opportunity for a wonderful collaboration, and the beautiful mural has been used as one of the awareness materials at the Centre, where people come to learn about marine life.