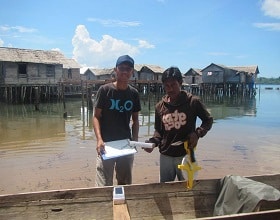 On 28 April, nine Vessel Tracking Systems (VTS), provided by Pelagic Data Systems, were installed in nine dugout canoes belonging to octopus fishers from Popisi Village in North Banggai, Central Sulawesi. These solar powered devices automatically record the boats’  position every few seconds, and the data can be uploaded via the cellular phone netowrk. Surya Risuana, one of the LINI field staff, explained to the octopus fishers the purpose of the devices, and helped them to install the devices in their small dugouts. Octopus fishers fish in the coral reefs following the reef slopes, from early morning to midday.  With these devices, the project will have the opportunity to better understand the fishing patterns in the fishing grounds of the octopus fishers of Popisi village, and can be used as the basis for the development of  better fisheries management plans in the area.