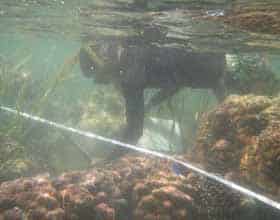 In August 2016 LINI team conducted a population survey of the Banggai Cardinalfish in seven sites in Banggai Island. The sites were Bongo, Kapela, Tolokibit, Monsongan, Tinakin Laut, Popisi, and Bone Baru. The survey aimed to monitor the distribution and population density of BCF that were conducted by LINI since 2007. END_OF_DOCUMENT_TOKEN_TO_BE_REPLACED